@ ALL LOCATIONS IN
Ukraine 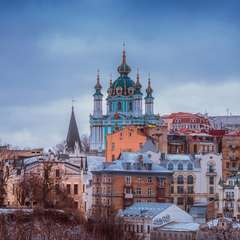 Ukraine (UA) is situated on the northern coast of the Black Sea in Eastern Europe, and shares borders with Russia, Belarus, Poland, Slovakia, Hungary, Romania and Moldova.

A country of tremendous historical importance, Ukraine has undergone centuries of occupation, upheaval, and fragmentation, beginning with Mongol invaders in the 14th century and continuing to the present day. Though hardly considered a major destination for tourism, Ukraine has a surprising diversity of attractions ranging from beach resorts on the Black Sea, the ancient architectural sites of Odessa, and the multi-cultural metropolis of the nation’s capital, Kiev.

The terrain is dominated by rolling plains, steppes, and plateaus that rise to the Carpathian Mountains in the west, while its climate is generally characterized as temperate continental, with mild winters and hot, dry summers.

As one of the largest Eastern European countries, Ukraine is marked by a wide range of cultural disparities across different regions, which don’t always translate to a complete sense of national identity.

The safest and most convenient way for visitors to experience the country is by car hire in Ukraine.

Nearly all of its most popular attractions outside of Kiev are separated by long distances and not efficiently covered by public transportation. Ukraine is well connected by an established network of major highways and roads. However, many of these routes are not in the best condition, and not very well marked, either.

Driving in major cities will involve a significant amount of congestion and confusion, as infrastructure appears to have been poorly planned and mismanaged. On the other hand, long distance driving is much less of a challenge, with plenty of road services and inexpensive fuel.

Foreigners should be aware of increased security measures, which means you’ll probably get pulled over and asked to provide travel documents with far more frequency than most countries in Europe. However, tourists are typically allowed to continue on their way without much of a fuss.

Tips and advice for renting a car in Ukraine

There are a number of no-go zones for visitors to Ukraine. Check with the state department of your home country for travel warnings and advisories.

Driving at night is not an issue in the major cities, where roads are properly illuminated. But nighttime travel in rural areas is not recommended due to poor visibility, rough roads, and animal hazards.

Car rentals in Ukraine are usually not allowed to be driven out of the country. This will probably vary among providers, so be sure to ask the rental agent if there are any restrictions on border crossings.

Ukraine is a predominantly cash based economy, so international credit cards may or may not be accepted outside of the major cities. Make sure you have a cash reserve available on you.

English is widely spoken around the major tourist sites, but nowhere else. Ukrainian and Russian are the most widely used languages.

The bulk of road signs in Ukraine are in Cyrillic only, but international pictograms are used for the majority of traffic controls. Some of the major highways may have directional indicators in Latin (Roman) characters.

Frequently asked questions about renting a car in Ukraine

1. What is the best time of year to book a rental car in Ukraine?

2. Is it possible for one way rentals in Ukraine?

3. Should I rent a round trip or one-way rental in Ukraine?

4. Which location should I rent my car from in Ukraine?

5. Do I pay more fees and taxes for renting a car at the airport in Ukraine?

6. What insurance do I require for driving a rental car in Ukraine?

7. What is the best way to save money on rental car insurance in Ukraine?

8. Should I prepay my rental car booking in Ukraine?

9. What are the largest numbers of vehicle seats available for a rental car in Ukraine?

10. What types of sports and special cars are available in Ukraine?

11. Can I take my rental car across borders in Ukraine?

12. How do I inform the rental company I will be crossing a border from the Ukraine?