@ALL LOCATIONS IN SWAZILAND 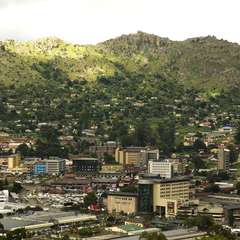 One of the world’s last absolute monarchies, the landlocked country of Eswatini (SZ), also known as Swaziland, is located in Southern Africa, bordered by South Africa to the west and Mozambique to the east.

Comparatively speaking, Eswatini is considered one of the most peaceful and friendly countries in Africa, and known for its popular large game parks and nature reserves.

The tiny country is divided into four administrative regions, with the nation’s capital of Mbabane located in the northwest Hhohho District. Eswatini’s terrain is split evenly between northern highlands and southern lowlands, and it’s tropical climate is moderated by wet and dry seasons. Although tourism is a strong growth industry, the monarchy’s main source of income comes from agricultural exports.

The most efficient and convenient way for visitors to explore is to rent a car in Eswatin/ Swaziland. Many destinations are accessible by paved roads, and driving across the country can be done in a couple of hours.

Congestion in Mbabane is typical during peak hours, but otherwise, traffic is light and roads are in outstanding condition, but again, by African standards. Drivers from highly developed Western countries may complain about bumpy roads here and there, but the ride is never too long.

Local drivers are on the safer end of the spectrum, but law enforcement isn’t exactly aggressive when it comes to traffic violations. But don’t get the wrong idea — you still need to drive by the rules. With a significantly lower crime rate than its neighbors, the most dangerous places in Eswatini are the rivers — where crocodiles and hippopotamuses are sometimes found.

Otherwise, experienced drivers will have little trouble navigating their way around the country.

Tips and advice for renting a car in Swaziland

Most destinations in Eswatini do not have street addresses, and road signage is posted at the bare minimum. Rent a car with GPS.

Car hires in Eswatini include Collision/Loss Damage Waivers, but Excess Reduction coverage is only available with online bookings.

Don’t drive at night in Eswatini.

Mobile wireless and cellular coverage is spotty in the interior, though getting better in urban areas. SIM cards purchased in Eswatini don’t work in South Africa.

Most car rentals in Eswatini can’t be driven out of the country without written authorization from the provider. Travel to Mozambique is most likely not allowed.

Eswatini is a predominantly Christian country, and visitors are encouraged to dress modestly. Skirts that cover the knees are appropriate for women, while shirts with sleeves are suggested for both men and women. If attending an event where the king is present, it’s recommended to dress up a little bit. Meanwhile, shorts are acceptable for both sexes in game parks and nature reserves.

Are you driving a rental car in Swaziland?