Search For Your Rental
IN SPAIN OR NEAR YOU
Pick-up

WE COMPARE OVER 800 CAR RENTAL BRANDS 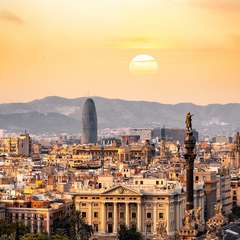 One of Europe’s most popular holiday vacations, Spain has it all. A remarkably diverse country, it offers sunny coastlines, mountain ranges, elegant cities and a world-class food scene. Discover the architectural masterpieces of Gaudi in Barcelona, or spend a day at Madrid’s Prado Museum, one of the top art museums in the world.

In 2018, 82.8 million people visited Spain from abroad, drawn to its charm and history. The Moorish sites in Andalucía, including the stunning Alhambra of Granada, and the mosque of Córdoba, vie with the culture of flamenco for visitors’ attention. In the north, San Sebastián has one of the highest per-capita rates of Michelin-starred restaurants. Booking a car rental in Spain is the ideal way to discover this vibrant country.

Spain has a network of modern, well-maintained roads and highways. Note that many of the highways are toll roads, but these can be avoided by taking smaller roads (which will add some time to your itinerary). Although many drivers do it, you aren’t allowed to use your car horn unless it is an emergency.

All drivers are furthermore required to have a reflective jacket on if they leave the car in a breakdown situation, and  they must also place a warning triangle by the side of the road (both of which need to be kept in the car at all other times). These should be provided in your rental car, but check before taking the wheel.

Some of the car hire companies in Spain include Europcar, Sixt, Enterprise and Avis. Couples and solo travelers can book a compact car from a brand such as SEAT or Fiat, the best choice for a cheap car rental in Spain. Larger groups can go for a 7—12 person mini van or people mover; the best choice for families might be an SUV. For a luxurious experience, rent a car with Mercedes-Benz, BMW or Audi. Another fun choice is a convertible, although you may want to keep the roof up during the very hottest days of the summer and the air conditioning on.

Tips and advice for renting a car in Spain

Consider getting a comprehensive supplemental insurance for your car rental. Ideally with CDW ( collision damage waiver ) excess cover which reduces payments to nil.  This might be found on your regular travel insurance, here on this site or the car rental company itself. Usually, if not on your travel insurance the next cheapest option will be found on our site in the booking process.

Be careful in roundabouts; they are not always well marked, and other drivers do not always respect the rules.

Before your trip it’s a good idea to read up on the rules of the road in Spain, which can be accessed online.  You will also find a good summary of key rules here on this page.

Carefully observe no-parking signs with your Spain car rental, as parking in a prohibited area, especially if it is a protected natural space, can lead to a steep fine.

If you see a lane on the highway marked with “BUS-VAO,” do not drive there unless you have more than two people in the vehicle at the indicated times. These are reserved for high-occupancy cars and buses.

For an unforgettable road trip in the south of Spain, pick among the spectacular cities of Cadiz, Cordoba, Granada, Sevilla, Ronda and Malaga. Keep in mind, however, that it can get very hot during the summer, so be sure to get a car with air conditioning.

Located on the Iberian Peninsula with much of its coastline on the Mediterranean Sea, Spain offers visitors a multitude of holiday options. In fact, Spain is the third most visited country in Europe and is blessed with thoroughly modern cities that still hold their old world charm. Interestingly, Spain has the most number of World Heritage cities found throughout Europe.

Along its vast coastline, much of the locals lives revolve around the Mediterranean, either with what can be found in it, or how it can be prepared once found! Of course, there are many incredible places to visit, we picked out a few that you should definitely not miss out on. So hop in your rental car and discover the magic of Spain!

A trip to Barcelona will forever be emblazoned in your mind with the yearning to return filling your conscience until you finally do.

Barcelona is an incredible city, filled some of the most amazing architecture in Europe, mostly all of it designed by Antoni Gaudi. His most notable design is probably La Sagrada Familia, a cathedral in the city, under construction since 1892 and still not expected to be finished before 2030. Its four tall towers stand out above the Barcelona skyline.

Other attractions include Camp Nou (the home of Barcelona FC), the Magic Fountain of Montjuïc, the Picasso Museum, numerous other Gaudi architecture and a host of other cultural attractions. Fresh produce is sold daily from open air markets found throughout the city, mostly to restaurants and tapas bars that produce some of the finest cuisines in the world.

Finally, take a walk down Las Ramblas, a large pedestrian avenue in the heart of the city to get a real feel for Barcelona. This area is loved by tourists and locals alike!

Madrid is the official capital of Spain and is situated roughly in the centre of the country. It is known for its artistic heritage and has many excellent cultural and historic attractions, not to mention the splendour of its architecture.  At night time, Madrid comes alive and has become one of the party capitals of Europe.

One of the main attractions in Madrid is the Museum District, incorporating five separate museums and galleries. The most spectacular of these, the Museo del Prado holds one of the best art collections anywhere in the world. Many other museums can be found in other districts and cater for a broad range of interests.

Madrid is filled with beautiful parks, an 8-hectare botanical garden, a zoo and an aquarium to keep the youngsters entertained.

The Costa del Sol or “Sun Coast” runs down the southern coastline of the country right along the Mediterranean Sea for around 150 km. There are many coastal towns to be found in the region, some more “touristy” than others.

Of course, most people come here for the sea and the sun, but just inland, many small towns and villages can be found, each unique in their own way. These are the places to explore, to meet and interact with the locals, especially if you have had enough of the blazing Spanish sun!

Don’t forget the cultural attractions in the area. In fact, there are over 700 culturally significant places, monuments and archaeological sites found throughout the region.

At Cheaperthancars and Cheaperthanhotels, we have incredible deals for both car rental and accommodation. This allows you to save money and use it towards making your holiday an even greater experience.

Spain is renowned for beautiful countryside and spectacular coastal views, all of which you can enjoy from the roadside. But before doing so, it is vital to keep yourself informed on how to go about driving in this country, and hence avoiding car horns beeping in your direction. Bearing in mind the following rules and tips closely will leave you with nothing but a wonderfully memorable experience.

When driving in Spain it is mandatory to carry your driver’s license from your home country with a photograph, accompanied with your IDP if you are from outside of the EEA. You must also carry your passport, log book (V5), and proof of ownership/rental and insurance documents stating that you have the minimum third party cover that is required to be allowed to drive legally in this country. You will also be expected to provide receipt of payment.

The minimum age for driving a vehicle legally in Spain is 18, and 16 for motorcycles. Generally, you must be between 21 and 79 years old to rent a vehicle, which may vary a little depending on the company. Children up to 9 months old and up to 10kg should be placed in a carrycot on the backseat using approved safety belts. Children up to the age of 12 are not permitted to sit in the front seat.

Different types of vehicles in Spain must adhere to different rules regarding speed limits. The general passenger travelling car must stick to the following speeds:

Not adhering to these speed limits will result in fines. These fines are on-the-spot and you will be expected to pay 50% of the fine upfront and if you don’t have the money you will be escorted to a cash point.

Warning: Failure to pay a fine will result in your vehicle being impounded.

This is considered a very serious offence in Spain and being discovered with Blood Alcohol Content (BAC) of 0.05mg/100ml in your system will mean a 500 euro fine and points on your licence. If you are unable to get your car home, then you will have to wait with your vehicle until you have sobered to the legal limit.

If you are found to have over 0.60mg of alcohol in your system, you will be arrested, fined, have your licence revoked, your vehicle taken away and left with a criminal record and a trial to attend in Spain.

Warning: Drunk driving can lead to a prison sentence.

It is prohibited to park in streets with yellow cubs, NO parking signs, within 7 metres of a bus stop or in areas only designated to residents. Parking spaces with blue lines means that the parking is changeable therefore you must buy a ticket from the machine or an attendant. The hours of paid parking in Spain is usually Monday to Friday 09:00 — 14:00 and 16:00 to 21:00, Saturdays 09:00 — 14:00 and then free on a Sunday.

Warning: Parking in small towns or villages can be tricky so parking just outside and walking instead is advisable.