@ALL LOCATIONS IN MAURITIUS 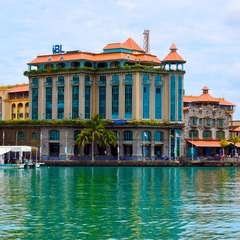 The multi-cultural island nation of Mauritius (MU) lies 1,200 kilometers (720 miles) east of Madagascar in the Indian Ocean and includes the remote islands of Rodrigues, Agalega, and Cargados Garayos (St. Brandon). The island was first discovered in the 9th century and remained uninhabited until the late 1500s. Since then, Mauritius has evolved into a stable democracy with one of the strongest economies in the African region. In terms of spatial dimensions, the mainland is 65 km (40 mi) long by 45 km (30 mi) wide, featuring 150 km (100 mi) of pristine white beaches, and sheltered from rough sea conditions by world's third-largest coral reef, which circles the island. The primary tourism attractions in Mauritius are focused on its tropical climate, natural beauty and unique native fauna and flora.

Driving in Mauritius is about a simple as things get, with one main freeway traversing the island on a north-south orientation, and a solid network of roads branching off into outlying areas. Despite its small size, visitors who wish to explore Mauritius outside of the capital, Port Louis, will definitely want to rent a car. Nearly every destination on the island is within an hour’s drive of each other — the majority of which are found in the Northern Tourist Zone. However, the shining jewel of Mauritius is Blue Bay, famed for its otherworldly clear, blue water and blindingly white beaches, located in the southeast. Driving conditions are generally safe, even in the remote inland areas, and most travelers won’t have trouble finding their way around. But, of course, the caveat is cost — everything from food to car rentals in Mauritius are somewhat more expensive than comparable destinations.

For the best deal on cheap car rentals in Mauritius, you should consider booking your car hire with Enterprise, Sixt, Europcar, Dollar, Budget, or Thrifty. Choose from minicars and compact hatchbacks, economy and fullsize sedans, SUVs, estate wagons, and 7-12 seater minivans.

Tips and advice for renting a car in Mauritius

Most visitors to Mauritius collect their car hire from Sir Seewoosagur Ramgoolam International Airport (MRU), the singular entry point for foreign visitors. While there are a smattering of car rental locations across the island, be forewarned that you get a better deal by picking up and dropping off at the same location.

There’s a slightly ridiculous fee to leave the car rental parking lot that must be paid in cash. Make sure you exchange some money before leaving the airport.

High season for tourism lasts from late May to mid September, but a steady flow of travelers persist throughout the year. The Christmas and New Year period is another peak. Book well in advance to reserve your car and get a good deal. The longer you wait, the higher the prices get.

There are no roll-on/roll of ferry services to the outlying islands, so you can’t take your Mauritius car hire off the island even if you wanted to.

English is the unofficial language of Mauritius, but French and Mauritian Creole are the most widely spoken languages.

All road signage in Mauritius is modeled after those found in the U.K.

Are you driving a rental car in Mauritius?