@ ALL LOCATIONS IN
Indonesia 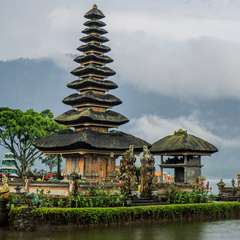 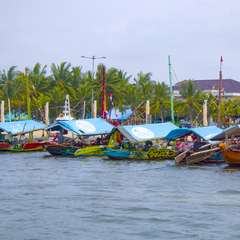 Straddling the Equator amidst the Indian and Pacific Oceans, Indonesia is an incomparably vast country consisting of more than 18,000 islands. The archipelago is home to a staggeringly diverse range of destinations and attractions that includes the provincial groupings of Sumatra, Java, Bali, Sulawesi, and Papua New Guinea. With over 100,000 kilometers of pristine beaches, Indonesia is one of the world’s top aquatic destinations. Meanwhile, the region’s position on the Ring of Fire means volcanoes — underwater and aboveground — surrounded by dense jungle and rainforest.

Getting around Indonesia by car will be somewhat familiar to experienced drivers, particularly if they’ve spent any time in other Asian countries. If you can manage driving in Vietnam, driving in Indonesia will be a walk in the park. First and foremost, motorcycles and scooters outnumber automobiles by a large margin. Roads are crowded and frequently in sketchy condition. Traffic regulations are ignored, and law enforcement seems to be arbitrary. Outside of urban areas, service stations are scarce, and roads get washed out in monsoon season. Still, the best and most efficient way of exploring the country is by car. If you’re having doubts, consider the fact that plenty of people have done it — without much of a problem. And on an even more positive note, car rentals in Indonesia are among the cheapest in the world.

Tips and advice for renting a car in Indonesia

Indonesia is one of the few places in the world where it’s probably in your best interest to have far more insurance coverage than you ever thought you might need. Minor accidents are very common throughout the region.

Though it may sound counterintuitive, driving too slow on Indonesia roads is actually more of a hazard than keeping up with the flow of traffic.

Again, it may sound odd to drivers from Western countries, but there’s absolutely nothing wrong about pulling out in front of other vehicles. The Indonesian mindset is that you’re only responsible for what’s in front of you. Therefore, if you want to change lanes, just slowly drift over and let the car behind you adjust to your movement.

Driving in rural areas at night is expressly discouraged. Roads are poorly illuminated and marked, road services are scarce to non-existent, and cell phone coverage can be spotty.

Use of the car horn is the most common way of letting other vehicles know your position and intention.

Roads in Indonesia are unofficially classified as any pathway where wheels can gain traction. However, most Indonesia car rentals are forbidden from driving on unpaved roads. While it’s generally a good idea to discuss your travel plans with the car hire vendor, get a good idea about what they consider a “road” before heading out to remote areas.

With over 18,110 islands, Indonesia is the world’s largest archipelago. Only 6000 of these islands are populated, with around 240 million people living on them. This makes Indonesia the fourth largest country in the world in terms of population.

Sumatra, Bali and Jakarta are the most famous of all the islands in Indonesia. They are visited by millions of tourists annually. Attractions include incredible beaches, surfing spots, brilliant shopping opportunities and numerous cultural places of interest.

Although there are not many motorways, it is possible to see these beautiful islands by rental car. Don’t expect the rules of the road to be obeyed as you know them and be prepared for pedestrians, cyclists and motorbikes… lots of them! However, a little bit of traffic stress is more than worth it to see some of the most incredibly scenic drives in the world.

A twisty mountain pass up the Mount Batur crater, this road is one of the most beautiful in Bali. Not only will you be afforded some incredible views of the surrounding area, but there are many villages and temples to explore.

The route is also line with clove orchards and during their growing season, the smell of the fresh cloves adds another dimension to your travels. Notable stops along the way include the only pine forest in Bali, the Puri Penulisa (the highest temple on the island) and the town of Kintamani in the Batur crater itself.

Bring your camera because once in the Batur crater, the panoramic views of the surrounding countryside, the crater itself and Lake Batur are breathtaking.

Situated in the north of the island, this coast road is fairly remote, but well worth a slow meander as follows the eastern side of Mount Seraya.

Not only is the road a little twisty, but there are large changes in elevation while some parts are extremely narrow. There are many Indonesia villages to be found along the route, so take your time and explore.  The sounds in this area are amazing, with nature providing an incredible audio backdrop.

Take some time out to listen to the sea along the coast, the sound of the villagers, the variety of animals in the area and the bird mating songs as they call out to each other.

Now that you have seen two beautiful scenic drives on Bali, you might wish to stay longer to discover a few more of your own. Accommodation options in Bali include guesthouses, hotels, resorts and backpacker lodges.

It doesn’t matter if you travel from Pedang or any other part of the Indonesian island of Sumatra, just be sure to make your way to the Kelok Sembilan highway bridge. This bridge, which connects the West Sumatra Province with the Riau province, is found outside the town of Payakumbuh.

The views along Kelok Sembilan are some of the best in Indonesia. There are two roads here, the old and the new. Both can be driven although the old road is steep and scary!

The new road, a series of bridges built over the ravine, is a little less scary but still provides stunning views of the surrounds.

Cheaperthancars and Cheaperthanhotels offer great deals for both car rental and accommodation. This saves YOU money that you can use to make your holiday even more special!

Frequently asked questions about renting a car in Indonesia

1. What is the best time of year to book a rental car in Indonesia?

2. Is it possible for one way rentals in Indonesia?

3. Should I rent a round trip or one-way rental in Indonesia?

4. Which location should I rent my car from in Indonesia?

5. Do I pay more fees and taxes for renting a car at the airport in Indonesia?

6. What insurance do I require for driving a rental car in Indonesia?

7. What is the best way to save money on rental car insurance in Indonesia?

8. Should I prepay my rental car booking in Indonesia?

9. What are the largest numbers of vehicle seats available for a rental car in Indonesia?

10. What types of sports and special cars are available in Indonesia?

11. Can I take my rental car across borders in Indonesia?

12. How do I inform the rental company I will be crossing a border from the Indonesia?