@ALL LOCATIONS IN FRENCH POLYNESIA 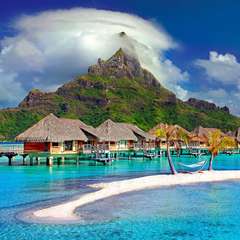 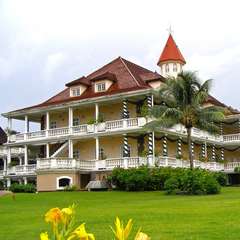 The French overseas territory of French Polynesia (PF) is an island group in the South Pacific Ocean, situated roughly midway between Australia and the coast of Southern California and Chile in South America.

Its most famous and largest island is Tahiti, home of the capital city, Papeete, followed by Makatea, Kiribati, Banaba, Bora Bora, and Nauru. The tropical climate has very little statistical variation, with an average temperate of 27°C (80°F).

Most visitors come for the beaches and scuba diving, plus a range of modest wildlife and natural adventure activities. Outside of the nautical stuff: boating, fishing, snorkeling, there isn’t a lot to do in French Polynesia except shop at local markets, enjoy some of the local cuisine, and laze about your nipa hut on the lagoon with a couple of citrus cocktails.

The typical day trip on Bora Bora would involve a Jeep tour around one of the volcanic formations, and a loop around some of the local tourist traps in Vaitape. What the country lacks in general variety is more than made up for with the turquoise blue waters and blinding white sand beaches.

It would be disingenuous to suggest that it’s absolutely essential for visitors to rent a car in French Polynesia, starting with the fact that you can’t even drive on some islands.

Tahiti and Bora Bora are the only two places where you can book online car hires, and the road network of both islands consists of one main road that circles the coastline, and a bunch of unpaved roads that go a little way up the mountain before dead-ending.

But if you plan on doing some hopping around and exploration of lesser-known spots, then by all means, renting a car is the best option. Now, this kind of island driving is characterized by low speeds, bumpy road conditions, and a general lack of orientation.  However, that’s the positive’s of renting a car in French Polynesia, because you will find places to get to that are a little off the grid.

The road runs in a big circle. You can’t really get lost in Tahiti, unless of course, you decide to be a cavalier and take the vehicle off-road — where it’s not supposed to go. Meanwhile, traffic congestion is a big problem in the capital, Papeete, but otherwise light on the rest of the islands.

Tips and advice for renting a car in French Polynesia

Driving at night in Tahiti is actually not bad as long as you stick to the main road.

You must be 21 years or older to rent a car in French Polynesia — no underage fees involved.

Early returns of French Polynesia car hires may be eligible for a partial refund.

Most road signs in French Polynesia are in French, but English is widely spoken in the major destinations.

Inform your French Polynesia car rental agent if you want to take the car on a roll-on/roll-off ferryboat. There’s no consensus on whether or not it’s allowed.